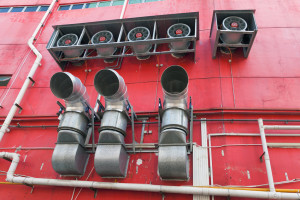 While the damage wasn’t significant, one Wisconsin business was left to clean up the centrifugal cooking vat and chimney fans after a fire broke out inside Kettle Foods Potato Chip Factory on the morning of Monday, Nov. 2. The City of Beloit Fire Department responded at 8:50 a.m. to the factory located in Beloit, WI, according to the Madison-area NBC affiliate NBC15.com.

When firefighters arrived on the scene they saw smoke coming out of the chimney exhaust fans on the roof of the building, located at 3150 Kettle Way. Fortunately, all of the employees were able to escape the factory safely and the fire department had the blaze under control within about 30 minutes.

Additionally, fire officials said the fire only ended up doing about $170 worth of damage. The fire itself didn’t do any real damage to the structure of the building as it was contained to one of the centrifugal cooking vats, according to Beloit Fire Department Deputy Chief Joseph Murray.

The direct cause of the fire is still under investigation.

It’s unclear if the factory has any sort of demand ventilation controls, which typically reduce the cost to operate an exhaust system by anywhere from 30 to 50% and can be installed on either new installations or retrofitted to existing hoods. It’s also unclear if they had any utility fans, which are normally roof-mounted with the inlet and outlet 90 degrees from each other and are typically used where high-static pressure losses exist.

While the centrifugal cooking vat is believed to have been at the center of the problem, it’s also possible the issue could have stemmed from a lack of sufficient cleaning. On average, restaurant exhaust systems are typically cleaned at least once every three months, but sometimes more. It has yet to be determined if regular maintenance of the factory’s exhaust fans were properly adhered to.

Premier Source of Ventilation Equipment since 1918